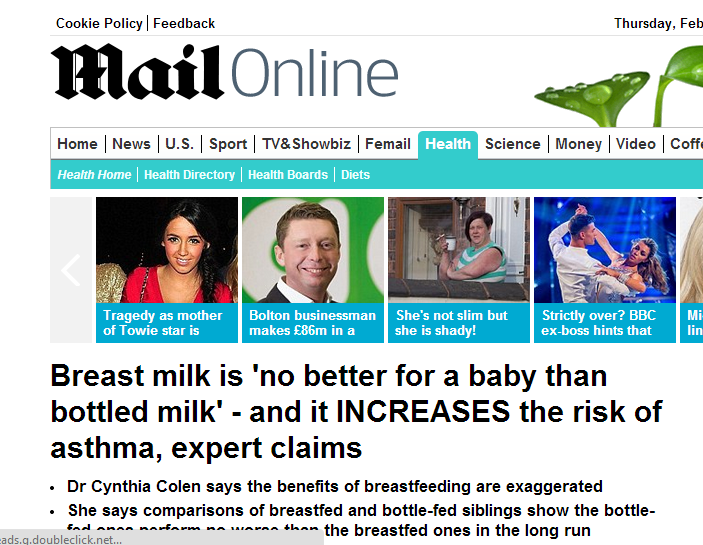 You may have seen this article in the Daily Mail, with the provocative headline:
"Breast milk is 'no better for a baby than bottled milk' - and it INCREASES the risk of asthma, expert claims". Having done some digging, including reading the abstract, extended abstract, press release and the full text of the scientific paper (Colen, C.G., Ramey, D.M., Is Breast Truly Best? Estimating the Effects of Breastfeeding on Long-term Child Health and Wellbeing in the United States Using Sibling Comparisons, Social Science & Medicine (2014), doi:10.1016/j.socscimed.2014.01.027. - available via ATHENS, or to purchase online) that this article is based on, and other reports, it's clear that the findings of this study should not be dismissed out of hand simply because they appear to contradict what we think we know about the long-term impact of breastfeeding on child health.

I recently heard scientific research described as 'like a jigsaw puzzle, except that there are no straight edges, and no picture to follow on the box' and thought that this was a useful way of thinking about it. Each new piece of research fits in somehow, but the how and where of it can take a long time to unravel. What's interesting, and what moves our understanding forward, is continuing to delve deeper, and, instead of dismissing results that we instinctively feel are 'wrong', asking 'How did the researchers obtain these results? Are their methods sound? Why did they get the outcomes they did? Are there clues in their work about other things we need to know before we can draw a sensible conclusion? Should we be acting to alter our recommendations or behaviour based on this research, or not?'

Of course, the above has nothing to do with the poor reporting of the research in the media (for interest, compare the Daily Mail article with this one for an illustration of how different two reports based on the same press release can be). My hackles rose at the line 'The NHS recommends that mothers breastfeed for around six months' - it doesn't, it recommends exclusive breastfeeding for around six months and continued breastfeeding alongside other foods after that, with no maximum duration specified. That the most basic of fact-checking hasn't been carried out makes me suspicious of reading too much into the Mail's slant on the story (that, and past experience of the Mail's anti- breastfeeding/anti-breastfeeding supporter agenda). Looking closer at the piece it follows the press release fairly closely, except that in certain telling ways it exaggerates the impact of this study, despite the authors taking care in their discussions to take a fairly moderate view. Something as simple as the Mail choosing to include a bullet point beneath the headline that reads "Dr Cynthia Colen says the benefits of breastfeeding are exaggerated", when in fact the press release says "A new study comparing siblings who were fed differently during infancy suggests that breast-feeding might be no more beneficial than bottle-feeding for 10 of 11 long-term health and well-being outcomes in children age 4 to 14." (my italics) serves to overstate the importance of this one study in the context of all the research into breastfeeding, artificial feeding and maternal and child health that is currently being carried out. Characterising Dr Colen as a generic 'expert' is another case in point; she's a sociologist, and an assistant professor - but what does this tag of 'expert', as applied by the Mail, mean? That she's more expert than other breastfeeding researchers? That she's the 'best expert' on breastfeeding that there is? There are plenty of other intelligent, committed, qualified researchers into breastfeeding currently working on research that may or may not support the findings of this paper - but the way the Mail uses the term 'expert' here suggests to the reader that this particular paper is somehow more important than others. I've talked before about the danger of believing that each new research paper moves everything 'forward' and it's helpful to remember it here - there are countless blind alleys and twists and turns in the quest for knowledge, and avoiding hyperbole when reporting new research would be a good start in making this more generally understood.

I've read the full paper and, I've got to confess, I am no statistician, so I am not best-placed to comment on whether the methodology is robust. At first glance, as an interested lay-person, it seems like a useful study, carefully designed to address some of the difficulties of previous studies, with some interesting results. The questions that immediately sprang to mind as I read it, which I would love others to examine in more detail, were the fact that the sample size of the differently-fed siblings was small - could it be that the numbers aren't sufficiently powerful to show statistical significance? I also wondered about breastfeeding duration - the researchers asked whether breastfeeding was initiated, and how long (in weeks) it went on for, but I couldn't find any numbers for this in the paper - what was the mean duration of breastfeeding in these families where one child was bottle-fed and one child was breastfed? If we are talking about the difference between two months or less of breastfeeding and bottle-feeding from birth, I would expect the results to show less of a difference than if we were comparing six months, or a year of breastfeeding against bottle-feeding from birth (based on the research I've read that shows a dose-response effect of breastfeeding on infant health). I found myself wondering about the scenarios in which one child in a family is breastfed and the other bottle-fed and how those might appear in these statistics - a common scenario in our culture of infant feeding in the UK, which I come across regularly as a breastfeeding peer supporter, is that a mother tries breastfeeding with her first baby, stops early due to a lack of support, then doesn't 'put herself through all that again' with subsequent children. I also wondered about whether the results of this study could be extrapolated to the UK or other Western cultures - the Mail certainly seems to think they can, as it was very unclear in their article that this was actually a US study (despite it being clear in the title of the paper itself). Differences in the racial and socioeconomic profiles of our respective societies might be important (indeed, the researchers note that one of the features of the differently-fed group is that the racial profile is different from that of the other two comparison groups, with the highest proportion of black/Hispanic families - although they urge caution in attaching too much significance to this).

Something else that was interesting to me is how the authors of the paper position themselves in terms of the research and debate surrounding infant feeding. In the introduction the authors write:

"Scientifically, disparities in infant feeding practices raise the critical question of the degree to which unobserved heterogeneity between children who were breastfed and those who were not may be driving the frequently noted positive association between breastfeeding and a wide variety of childhood outcomes. If this is the case, a well-intentioned, narrow emphasis on breastfeeding promotion would, at best, fail to realize positive benefits and, at worst, be a source of oppression for women who do not nor cannot breastfeed." (my italics)

This all sounded familiar to me and there's a reason for that, which becomes clear at the end of the paper:

"A truly comprehensive approach to increasing breastfeeding in the U.S., with a particular focus on reducing racial and SES disparities, will need to work toward increasing and improving parental leave policies, flexible work schedules and health benefits even for low-wage workers, and access to high quality child care that can ease the transition back to work for both mother and child. Hopefully, this multifaceted approach will allow women who want to breastfeed to do so for as long as possible without promoting a cult of “total motherhood” in which women’s identities are solely constructed in terms of providing the best possible opportunities for their children and the risks associated with a failure to breastfeed are drastically overstated (Wolf, 2011)." (my italics).

I think this at least sets the paper in context (for more, see my previous post about Joan Wolf). I should have guessed from the clue in the title of the research paper, 'Is Breast Truly Best?', which itself echoes the title of Wolf's book.

Let me be clear - I'm not dismissing the results of this paper. But just as its authors urge caution about overstating the benefits of breastfeeding in order not to oppress women, I urge caution about the importance we attach to the findings reported here, and suggest that we view them instead as one small piece of a very large jigsaw, and as a point of departure for asking further important questions.