When maternity doesn't matter: how the UK is failing vulnerable pregnant women 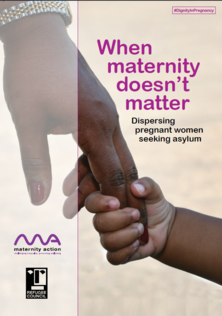 The Refugee Council and Maternity Action's report When maternity doesn't matter: dispersing pregnant women seeking asylum is difficult reading for anyone, but especially for those with an interest in women's experiences of pregnancy and childbirth. I was shocked and horrified to learn that in the UK today some of the most vulnerable women in society, whose pregnancies are almost all classified as high risk (due to health conditions like hepatitis and HIV; history of rape, torture or domestic violence; female genital mutilation; post-traumatic stress disorder and other mental health issues; loss of loved ones), are routinely having their access to maternity care delayed and interrupted and their right to dignity in pregnancy ignored. These are women who have applied for asylum, are part of the asylum process and thus living legally in the UK. They are entitled to NHS care. There are specific NICE guidelines for women such as these with 'complex social factors' affecting their pregnancies.

Yet what this report shows, in dreadful clarity, is how pregnant women seeking asylum are being denied access to proper maternity care at immense human cost. Through its policy of routine dispersal of asylum seekers (which means moving them as quickly as possible to accommodation outside London, with no choice in the matter and no prior warning, including during pregnancy, sometimes many times), and its failure to adequately provide for the needs of pregnant women, the UK Border Agency (UKBA) has denied women the care they (like all women) deserve and are legally entitled to.

The report is informed by the stories of women themselves, and the midwives who cared for them both before and after their dispersal. Their words are powerful and heartbreaking. There is much complex detail in the report too - about the asylum process and UKBAs pregnancy guidelines, about the support that asylum seekers receive and their accommodation arrangements - but it is the women's voices that stand out, recounting in simple terms the realities of their treatment. It's truly eye-opening. I know the power of women's stories - both from my work as a publisher of women's experiences of pregnancy, birth and breastfeeding, and as a peer supporter - and I welcome the way that this report has allowed the voices of these most vulnerable and invisible women to be heard.

Consider the story of Dana, an asylum seeker from Afghanistan who arrived in the UK eight months pregnant. She described her journey: “We were treated like animals – no food, no clothes, sometimes they put us in a container for maybe three or four days, we don’t eat, just dirty water dripping in the side. When I come here the doctor thought my baby was dead because it had stopped moving. So I stayed in hospital for three days.” After the hospital she was placed in Initial Accommodation (basic, hostel-style, shared bedrooms and facilities) where she tried to kill herself. The bitter irony that her suicide attempt came once she had claimed asylum in the UK can escape no one.

Dana was later dispersed: “I don’t know where I’m going because there is no-one to talk to us. I just received a letter and showed it to the African lady (roommate in Initial Accommodation). She said, they will send you to another house (miming the shape of a building)…” Once she was moved, alone and in unfamiliar surroundings, Dana went into labour. She'd been told not to call an ambulance to go to the hospital and to take a taxi. “That night (the night she gave birth) I was thinking that if I didn’t call the ambulance maybe I would die alone in this room. I was shouting and shouting... I didn’t have money to call a taxi.”

Before she gave birth Dana had no money to buy baby clothes. She was due a payment on the day she delivered, and thought she would lose it if she did not collect it immediately. So two hours after giving birth, she left her baby in hospital to go to the post office and then buy clothes for her baby. “It was freezing (December 29th)... For £35 I left my baby... The nurses said, ‘No you are not allowed to take the baby with you because you are not fine.’ I said, ‘No I have to go because she doesn’t have clothes. I have to buy clothes.’ So when she was born for two hours she didn’t have any clothes so they covered her with towels.”

Dana gave birth alone, with no interpreter, although she later had access to one. “When the interpreter came with the social workers she said, ‘Do you want to drink a cup of coffee?’ I said, ‘No’, because I thought that it cost money. She said, ‘No, these are free.’ She said, ‘When did you last eat?’ I said, ‘Last night.’ She said, ‘Oh my God.’ She went and brought me food and showed me where to get it from."

Dana's is just one story from the report - there are many others and they are all distressing. Pregnant women, suffering from physical and mental ill-health as well as the more minor symptoms of pregnancy, are isolated from their support networks, have little control over their own lives and are often living in poverty and poor housing. They are moved to new locations with no warning, in some cases as late as a day or two before they give birth, enduring long and uncomfortable journeys without proper arrangements made for food or comfort breaks. They speak little or no English and have very little money of their own.

But perhaps most crucially of all, women's access to maternity care is often fragmented, delayed or interrupted because of dispersal. Women who have built relationships of trust with their care providers, feeling able to disclose previous trauma or incidences of domestic violence, perhaps also undergoing treatment for mental health problems or chronic conditions, are then abruptly uprooted and sent to a new location where they must begin again with a new midwife who often knows nothing of their case history. (The report also highlights the difficulties of information-sharing within the NHS, which increases workloads, costs, and trauma for women, who may need invasive tests repeated.) It's a situation as frustrating for midwives seeking to provide maternity care appropriate to these women's complex needs as it is devastating for the women themselves.

As Rebecca Schiller, spokesperson for Doula UK and co-chair of Birthrights, explains: "Continuous support during labour is well-documented to decrease intervention rates, epidural uptake, increase APGAR scores and maternal satisfaction with no negative consequences. Asylum seeking women who are forced to give birth alone are being led  to a  birth that is higher risk for them and their baby. Not only do we know that this can lead to physical complications that require more post-partum support and psychological trauma that can lead to post-natal depression, but as the report points out, this is at a much greater cost to the NHS."

One midwife interviewed for the report described a case she was involved with: "D had been in the UK for about four years and had a young daughter. She applied for asylum after escaping violence and effective imprisonment by her partner and booked for antenatal care in a maternity unit after she was hospitalised with severe abdominal pain, directly from the Initial Accommodation centre. At this stage she was in the third trimester of pregnancy. The maternity unit offered her individualised care with a named midwife. It was also engaged in a wide range of multi-agency work on behalf of D including referrals to the Haven, a specialist centre for people who have experienced sexual violence, and a referral to the Child and Adolescent Mental Health Service, as there were concerns about her daughter’s safety and welfare. The maternity service worked with others to delay the woman’s dispersal, but she was finally dispersed without anyone being notified of where she was going, so that no continuing support by health visitors or others could be arranged." (my italics)

It's clear that women are being badly failed by UKBAs arrangements and its unwillingness to engage with the midwives and doctors involved in treating them. And the inadequacies of their treatment reflect badly on us all - in a supposedly civilised society it should not be possible for pregnant women - any pregnant women - to be treated like this. If you're angry, ashamed, and profoundly affected by these women's stories, as I have been, do please act. Read the report in full - it's well worth your time. The Refugee Council and Maternity Action are urging the public to write to their MPs about the report's findings. Visit their link at www.refugeecouncil.org.uk/dignityinpregnancy. You can follow the debate about the report on Twitter, using the hashtag #dignityinpregnancy.

I hope that this report leads to greatly improved circumstances for these vulnerable pregnant women and the midwives working hard to provide their care. Now that the failings of the system have been brought to light, they must be comprehensively dealt with to ensure that women can be pregnant and give birth with all the rights that they are entitled to as human beings and residents of the UK.

NB: You might also consider donating to Birthrights, the only organisation in the UK dedicated to improving women's experience of pregnancy and childbirth by promoting respect for human rights. As Rebecca Schiller notes: "Our remit to promote and protect the rights of childbearing women is all the more pertinent when those women are in a group whose rights are routinely ignored and whose physical and mental health suffers as a direct result."

The Doula UK Access Fund and other schemes Doula UK is involved with provide doula support to vulnerable women. Rebecca Schiller again: "Through these initiatives my colleagues and I have worked with asylum seeking women and are aware of the profound difference this support can make. Doula UK is committed to making doula support more widely available and we hope to liaise with agencies working with pregnancy asylum seekers on how we can ensure all women and their families have an adequate network available during pregnancy, birth and the postnatal period."