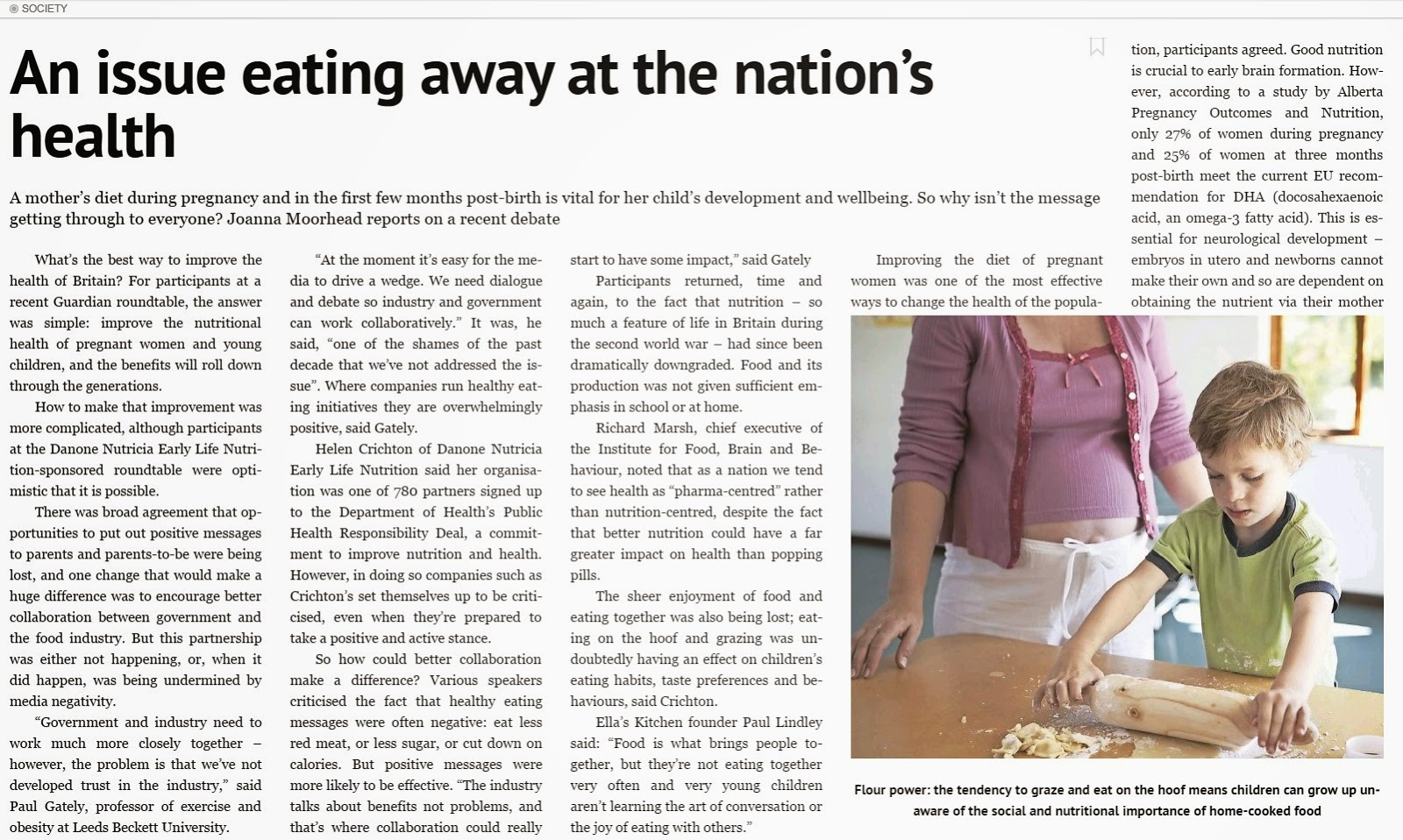 A couple of weeks ago I Tweeted my disappointment that the Guardian had decided to run a roundtable discussion in association with Danone Nutricia; yesterday an article reporting on the debate appeared in the paper's society section; a full page, with the Danone Nutricia Early Life Nutrition logo clearly displayed, and an explanation that the content is editorially independent (which presumably means that the journalist, Joanna Moorhead, wrote her piece reporting on the discussion without having the text approved by Danone). As Helen Crichton, head of public affairs for Danone Early Life Nutrition took part in the discussion itself, and Danone was able to suggest topics to be included in the discussion, the term 'editorially independent' is at best only partially accurate.

Mike Brady, Baby Milk Action's campaigns coordinator, has already published an excellent response to the Guardian article; you can read it here. What follows is my personal response to the article, which attempts to explain some of the reasons it made me so uncomfortable/furious.

Participants
Paul Lindley, founder of Ella's Kitchen
Helen Crichton from Danone itself;
Judy More, freelance dietician. Her website reveals that she is on the editorial board of the Journal of Family Health Care, which runs training events sponsored by formula companies including Nestle, Danone and Hipp Organic, and that she has worked for the Infant and Toddler Forum:

Professor Paul Gately from Leeds Metropolitan University. He has previously been a speaker at an event sponsored by the Infant and Toddler Forum.

Four of seven panel members have a clear conflict of interest in the discussion, because they are currently, or have been in the past, paid by companies that make profits marketing and selling products aimed at babies and young children. Judy More and Paul Gately's conflicts of interest were not made clear in the article; I found their earlier links to Danone with a simple search.

A major problem with this sort of 'invitation' roundtable discussion sponsored by a formula company is panel selection. Anyone who's had any sort of training on the International Code of Marketing of Breastmilk Substitutes, who works in breastfeeding, public health or in a Baby Friendly accredited NHS Trust should refuse to be involved. (For more about health worker conflicts of interest, see here).

Content/discussion
Reading the article I found myself occasionally incredulous. Paul Lindley (Ella's Kitchen) is quoted as saying, 'Food is what brings people together, but they're not eating together very often and very young children aren't learning the art of conversation or the joy of eating with others.' This from a man who founded a company that makes pouches of ready-made pureed baby food that babies can slurp alone in their pushchairs without making a mess! Is it just me?

Dr Lucy Cooke said 'There's a lot of confusion about breastfeeding. The Department of Health says breastfeed to six months, but baby foods say 4-6 months on the jar'. Both Lindley and More, who should both surely understand the Code, the Department of Health guidelines and how information is given to new mothers, given their work, instead perpetuated the confusion, with Lindley appearing to advocate early weaning by saying that the earlier you give children vegetables, the more likely they are to eat them later on. What he didn't say was that early feeding (before six months) with pureed foods like apples, carrots and parsnips, which his company supplies in pouches, displaces breastmilk in a baby's diet and may reduce their overall nutrition rather than improve it.

I was also deeply uneasy about the suggestion that 'one change that would make a huge difference was to encourage better collaboration between the government and the food industry'. The food industry already has extensive access to contacts in government, and will lobby hard for its own interests. There is plenty of evidence that if companies are not regulated, then they will not restrain their marketing practices voluntarily. If the industry is so keen to do good, surely it should first put its own house in order: in the case of Danone, with 39 pages of marketing Code violations worldwide in the IBFAN Breaking the Rules, Stretching the Rules 2014 report, it would seem that the company has plenty of work to do before embarking on seemingly generous public health campaigns. Ella's Kitchen too could look at its early weaning guidance and labelling so that it better reflects the information that mothers are actually given.

And mothers are often given good information; but we didn't hear anyone talking about it in this debate because of the inherent conflict of interest. Health visitors, midwives and breastfeeding supporters could have painted another picture; one where UNICEF Baby Friendly and the First Steps Nutrition Trust are sources of clear, independent information for parents. The LIFIB (Lancashire Infant Feeding Information Board) is a great example of how information from companies can be critically reviewed and challenged before being passed on to health professionals (see @The_LIFIB).

I could go on, and on. I won't, but I will leave you with this quote from my forthcoming book with Gabrielle Palmer for Pinter and Martin Why The Politics of Breastfeeding Matter, which sums up my thoughts.

"When ‘knowledge’ comes from company promotion [which is what Danone-sponsored activities are] and poorly trained or corrupt health workers, parents and children suffer. Knowledgeable and supported families, who are aware that breastfeeding is normal, that artificial feeding carries risks, and that cheaper, safer baby foods can be made from locally available ingredients, end up healthier and less poor. The Code states that governments are responsible for ensuring that objective and consistent information on infant and young child feeding is provided. But it is hopeless to invest public money in providing such information if it is eclipsed by promotional untruths."