The publication of the full results of the Infant Feeding Survey 2010 on 20 November prompted a slew of articles in the press, with the BBC, Telegraph, Independent and Daily Mail all covering the story. However, in my view the most interesting points arising from the figures are not those that have been widely reported so far. 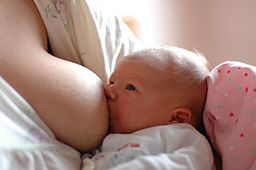 Last month I blogged about UNICEFs report into the cost-effectiveness of breastfeeding support programmes and how they directly impact maternal and child health in the UK. The full Infant Feeding Survey 2010 reinforces many of the arguments the authors of that report made in their assessment of the state of breastfeeding in our society. The survey is a lengthy document and there is so much information to be gleaned that it would take more than one blog to cover it all - so I'm going to mention a few points for starters and hope that others do the same.

Formula milk
If I were a formula company executive, I'd be pretty pleased about the results of this survey. British babies are consuming a lot of formula. They're also getting plenty of follow-on formula (a product designed entirely to circumvent the tight regulations covering the marketing of infant or first-stage formula). At Stage 3 of the survey, 69% of all  mothers had given their baby follow-on  formula, an increase from 53% in 2005. 31% of mothers did not understand the difference between infant formula and follow-on formula. All those adverts must be doing something! Some 89% of mothers report seeing adverts for baby milks on TV, radio or in the press, and 79% said these were adverts for follow-on formula. Rates of exclusive breastfeeding (which is recommended by WHO and the UK Department of Health up to six months) are much lower than the headline figures for breastfeeding initiation: 69% at birth, 46% at four weeks, 23% at six weeks. So by six weeks, more than three-quarters of UK babies have been given formula, water or solid foods. At six months just one per cent of babies are exclusively breastfed.

What's going on here? My feeling is that at least part of the explanation for these figures is the lack of confidence mothers have in themselves and their milk; a cultural doubt that breastfeeding really works. (The fact that mothers of second or later babies are more likely to exclusively breastfeed, and for longer, adds weight to this idea: experience brings confidence.) The survey itself concludes: "These findings illustrate the fact that the main reason why so few mothers follow the recommendation of feeding exclusively until six months is due to the introduction of formula, either to replace or supplement breastmilk." Elsewhere in the survey, where the incidence of feeding problems is discussed, the figures reveal that the highest levels of feeding problems are reported by mothers who are combination feeding. It's certainly my experience as a peer supporter that once formula has been introduced, and mothers' confidence in breastfeeding eroded, the road back to exclusive breastfeeding can be tricky. All this is surely an argument for supporting mothers for whom breastfeeding is working well not to reach for the formula in the first place, and a tightening of the restrictions on the marketing of infant formula (to health professionals) and follow-on milk (to everyone).

When mothers were asked their reasons for using follow-on formula, the most popular answer (20%) was that they thought it had more nutrients or was better for the baby. This is not true of either breastmilk, which is by far the best milk nutritionally for babies of any age, or infant formula.

Less than half (49%) of mothers are making up formula bottles according to the latest guidelines (making one feed at a time, within 30 minutes of boiling, water in bottle first, then powder). This may be a substantial increase since 2005 when the figure was only 13%, but it flags up (to me) the fact that mothers who choose to use formula are either not getting the right information or choosing to ignore it. In my experience a lot of mothers who stop breastfeeding are given no information about bottlefeeding at all. This is a missed opportunity, particularly when we know from the figures that so many mothers are using bottles and formula: surely these mothers deserve accurate, unbiased information that will promote the health and safety of their babies? Mothers need to know how to prepare formula safely, and during those conversations support can be offered that might lead to them offering expressed breastmilk instead, or adopting practices (such as paced bottlefeeding) that will benefit their children. Breastfeeding supporters cannot opt out of discussions about formula entirely, and if they do so they leave mothers unsupported and reliant on the formula manufacturers for information.


Information and support that mothers are given
Following on (!) from the points made above about mothers' confidence in breastfeeding, I found the following figures tough reading: "Just under half of mothers breastfeeding in the hospital, birth centre or unit (48%) were informed about how to recognise that their baby was getting enough milk and nearly two in five (37%) felt they were confident enough to recognise whether or not their baby was getting enough milk." There's a clear call to action there for midwives, doctors and breastfeeding supporters: all breastfeeding mothers need this information.

Home births, water births, pain relief
The 2010 survey is the first to include detailed information about where babies were born, with some very interesting results. Breastfeeding initiation is highest among mothers choosing a home birth (88% compared with 81% overall). This could be down to a variety of factors, including access to consistent support in the community, and predisposition of these mothers to breastfeed. However, these mothers also have the highest rates of continued breastfeeding in the early weeks: at one week 82% were breastfeeding compared with 70% overall, and by two weeks 81% of home birthers were still breastfeeding compared with 67% overall.

It seems there is important information here for women planning their births. My feeling is that the impact on breastfeeding of some of these decisions is often overlooked. Interestingly, mothers delivering in consultant-led units, and having complicated births, also had high breastfeeding rates, perhaps reflecting an increased level of support in hospital. That's information worth sharing with mothers too - a difficult birth does not, in itself, mean that breastfeeding won't work.

I've found reading the survey fascinating and there is so much more to come out of it - I've barely scratched the surface. It has highlighted for me the areas where breastfeeding supporters have the most work to do. Reaching groups that tend not to breastfeed has got to remain a priority, and supporting mothers throughout their breastfeeding journey is clearly important too - with good support tailing off as the weeks pass, mothers are left without information and many begin supplementing with formula unnecessarily. Antenatal information about breastfeeding needs to be realistic, practical and mothers need to know where and how they can access support once the baby arrives. Perhaps the greatest challenge, in a nutshell, is combating misinformation, which booby-traps mothers at every stage. Whether that's misinformation from peers, health professionals, formula manufacturers or the media, it needs countering with evidence-based information and good support. And at the same time, we all need to work towards making society more breastfeeding friendly too. It's a tall order, but not, I think, an impossible dream.